PRESS RELEASE
Now Available for Kindle, iPad, and other e-Readers

Novel Captures The Day of the Dead Celebration in Sicily

November 2: The Day of the Dead in Sicily is a thought-provoking story that captivates from beginning to end. The Day of the Dead is an important festival in many cultures, originating 3,000 years ago in Mexico with the Aztecs. Visiting Spaniards in the 1500s adopted the celebration, taking it home to Europe.

It is a day when children receive gifts from those who have died, and they eat special bone-shaped cakes. Cemeteries are packed with visitors placing flowers at gravesites and lighting candles in their tombs, which can look like small houses.

On such a day on the isle of Sicily, Mario Chiaramonte goes to the cemetery to visit the graves of his friends and relatives. As he strolls through the graveyard, he sees some special tombs, including those of a poet, a nobleman, and a Mafia boss. Mario also discovers some truths about living, its goodness and evil, and ultimately comes to see his own life in a different perspective.

“In some tribes that I visited in Tanzania, the dead were buried in front of the house where they had lived, but before being placed into an underground niche on the side of the pit that had been dug, the dead person was put on a chair in front of his house for a few hours. This way, the relatives and friends could offer condolences to the family.” Such is life … and death.

About the Author: Ettore Grillo was born in 1946 in Enna, Sicily, where he was an attorney for 37 years. This is his fourth work. His previous books are Travels of the Mind, The Vibrations of Words, and A Hidden Sicilian History.

“The cultural heritage behind the fascinating celebration The Day of the Dead is explored in this finely honed novel. We are pleased to be the publisher.” – Lynn Eddy, VP of acquisitions, Strategic Book Publishing and Rights Agency

Ettore Grillo author of these books:

– November 2 The Day of the Dead in Sicily
– A Hidden Sicilian History
– The Vibrations of Words
-Travels of the Mind
http://www.amazon.com/author/ettoregrillo

November 2 is a special day in Sicily. The Day of the Dead is considered an important festival, when children receive gifts from the dead and eat special bone-shaped cakes. Cemeteries are overcrowded with people walking in the avenues, placing flowers at gravesites, and lighting candles in their tombs. Many Sicilian tombs look like small houses: They contain a room, an altar, and marble-walled niches.

Mario Chiaramonte goes to the cemetery on this day. Besides visiting the tombs of his relatives and friends, he strolls throughout the graveyard. On his walk, he stumbles on some special tombs. A few have an epitaph carved on the tombstone or above the altar.

The tombs he visits house the bodies of a Mafia boss, a literary man, a poet, a nobleman, and more. Mario recalls the salient moments of their lives, and at the same time sees himself from a different detached perspective.

Romance, adventure, life, death, the Mafia, good and evil, racism, and impermanence are themes throughout the novel. November 2: The Day of the Dead in Sicily is thought provoking and captivating from beginning to end.

Ettore Grillo author of these books:

– November 2 The Day of the Dead in Sicily
– A Hidden Sicilian History
– The Vibrations of Words
-Travels of the Mind
http://www.amazon.com/author/ettoregrillo

The coffin was carried by my grandfather’s friends on their shoulders to the Church of San Cataldo nearby, and after Mass it was set on a hearse dragged by two black horses.
There were thousands of people at the funeral, and all of them followed the hearse to the cemetery. At that time there were not many cars in the streets, so whenever there was a funeral the streets were closed to traffic. Sometimes the municipal band played a funeral march for very rich or special people.

After the funeral we had a tasty dinner. For eight days we were served breakfast, lunch, and dinner by our close friends. All the families gathered around the table. In Enna, you could not make the time of mourning at your will. It had to last eight days. During this time, besides being served delicious food by our relatives and close friends, we received visits from our neighbors and acquaintances. The food we received was more delicious than anything I had ever eaten before—so much so that a doubt arose in my mind: “Is this a time for mourning or a party?”
After eating, we returned to the double bedroom to show our grief as the visitors came in little by little. I sat close to my mother and observed the scene. The visitors entered the room and gave condolences to the family members, starting with my grandmother, and then they sat on the chairs scattered across the room and remained silent or talked with some of the family members.
Every family member was dressed in black. As soon as a new visitor came in, my mother and Aunt Carolina put a sad expression on their faces. Then they started chatting with the newcomers. While they chatted their faces were quite relaxed, but whenever a new visitor came in, they stopped chatting right away and reassumed a sorrowful look. In fact, it was mandatory to show a contrite face; otherwise folks might think that they didn’t mourn the loss of their father.
Since then I understood the difference between “to be” and “to look like.” The change in my relatives’ faces in showing grief meant that appearances had great importance in people’s eyes.
The custom of judging by appearances was widespread in Enna. Even today we tend to judge by appearances and fail to see what is really hidden inside every human being. 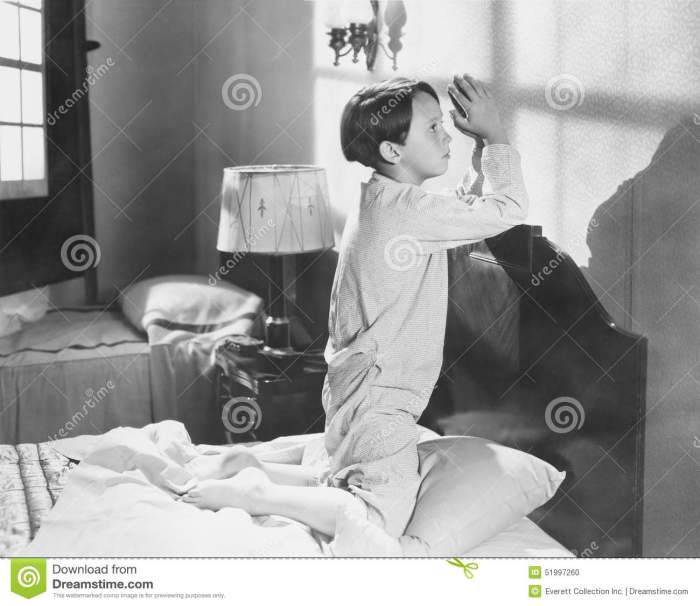 My grandma taught me some traditional prayers, which I still say every night before sleeping, even now that I am old.
One of these prayers is this:
I sleep in this bed
There is Mary over my chest
I sleep and she watches over me
If something bad is going to happen she will wake me.
The second prayer is:

I am with Jesus, I stay with Jesus.
As long as I am with Jesus I have no fears.
I know that I am going to sleep
But I don’t know if I’ll awake.
My soul be always commended (to Jesus).